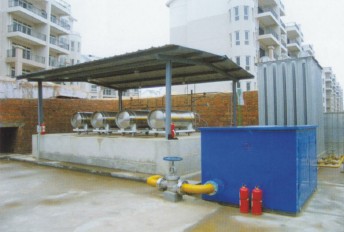 LNG Vaporizing System
Liquefied natural gas transported by LNG lorry tanker or container trailer is discharged into LNG storage tank through pressuring device. In using LNG, pressurize the storage tank with its self-pressurizing system, and discharge LNG to the vaporizer (in North China, users shall install water spraying heater to ensure gas temperature after evaporing above 5°C ), and LNG is transmitted to the pipe network by stinking through pressure metering device. Once liquid consumed, gas left in the storage tank and gas generated during storage will be discharged to BOG heater and finally transmitted to the general pipe network.

LNG Cylinder Station
Pressurize the gas cylinder with self-containing pressurizing device in LNG cryogenic thermal-insulating cylinder. LNG is transferred to the vaporizer for there exists pressure difference, and LNG is vaporized to be gas, which can be distributed to users after metering and stinking under proper pressure.

There are two groups of cylinders respectively for use and standby. When liquid level of LNG cylinder decreases to a certain extent, liquid shall be transferred to the standby cylinder, while the empty cylinder as abovementioned shall be filled in time.